Our world has seen coffee trends come and go for centuries, but the last few decades have really been a period of growth and evolution for the global coffee industry.

For this blog, we’re going to focus on three trends, movements, or—more commonly—’waves’ of coffee experiences that have evolved in the last few years. You’ve no doubt encountered all three coffee waves, but you may not have realized it.

These coffee waves have to do with bean quality, sourcing practices, and a handful of other elements. By learning about them, you can clearly see how coffee is evolving and where it’s headed. You’ll also gain a new way to communicate about a coffee roaster or cafe’s quality.

The First Wave of Coffee

The first wave of coffee is seen as the lowest quality and is known as commodity coffee. Think Folgers, Maxwell House, Green Mountain Coffee, and other brands that don’t have a strong focus on quality or sourcing transparency.

First wave coffee doesn’t really try to convince you that the grounds are special in any way. In fact, for decades most people in the United States didn’t even know that coffee beans come from a real-life plant!

Why? Because first wave coffee feels like it came from a factory, not a farm. There’s no (or rarely) any mention of the origin country or farm, there’s no information on how the coffee was processed, and there’s almost always a major focus on convenience.

The Second Wave of Coffee

We generally attribute the rise of second wave coffee to brands like Starbucks and Caribou Coffee that revolutionized cafe culture in the United States. These roasters and cafes brought coffee to life in a new way in the late 1900’s by introducing coffee lovers to a wider variety of coffee experiences.

They started publishing origin countries and began exploring higher-quality coffee, but they still didn’t really direct the customer to the coffee itself—but the experience.

For example, Starbucks pioneered what was once considered “specialty coffee drinks” in the US by mixing espresso shots with sweet, flavorful syrups and other ingredients. The emphasis still wasn’t really on the coffee, but the creative drink, the mood lighting, and friendly baristas.

This certainly added pizzazz and generated interest in coffee, but it rarely departed from the super-dark coffee roasting style of the first wave that left coffee bitter, uninteresting, and uniform.

The Third Wave of Coffee

Third wave coffee evolved from a niche community in the 1980’s that was highly focused on the coffee beans. This small group of roasters and cafes was experimenting with lighter roast levels and bringing new, exotic flavors out of well-grown coffees.In 1982, the Specialty Coffee Association of America was founded, giving a platform to this new style of roasting and brewing. At the same time, this wave was starting to become prevalent in other areas of the world like Australia, Canada, and Scandinavia.

This sub-industry grew and grew over the next couple decades. The term “third wave of coffee” was coined in 1999 and became a rapidly growing trend. As more and more consumers realized that there was more to coffee than bitterness and ashy flavors, a coffee renaissance emerged.

Fast forward to modern day. The phrase “third wave” has sort of fallen out of favor. This segment of the coffee industry is now more commonly referred to as “specialty coffee” and is the largest coffee sub-industry in the US.

We have our own major industry trade shows, worldwide competitions, and values. We love coffee for the beans themselves, not just the cafe experience. This fascination is manifested by our addiction to flavorful light and medium roasts, our love for transparency when it comes to a bean’s origin farm, and our love of coffee that’s made by-the-cup.

Even now, the specialty coffee world is growing and evolving. We’re continuously refining our techniques, questioning the systems that have long left farmers in poverty, and searching for ways to bring more flavor out of the precious beans. We’re experiencing coffee at a quality level that the world has never seen before—and it’s only getting better.

To get in on the action and see what all the fuss about third wave coffee is, try some of our specialty-grade, freshly roasted beans. The rich, balanced flavors will make you never want to walk down the aisle of first and second wave coffee at the supermarket again. 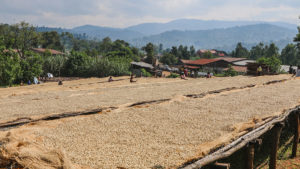